editor’s note: After a lot of research and conversations, we found out that Grocery Outlet was within their legal rights to charge EBT users for bags.

As a college student and journalist I’m not the most financially well off. Luckily, a new program started late in 2019 that allows low-income college students the ability to get food stamps and provide a bit of financial relief.

I had EBT benefits years ago but after enrolling in college lost them. When I heard about the new program I instantly applied. It’s helped me immensely to be able to keep a couple of hundred dollars in my budget monthly.

The other day I went into my local Grocery Outlet on 122nd and Division to make a few purchases for my evening’s meal on my EBT card. When it came to the new paper bag tax I had been told that EBT card purchases were exempt from it.

Even though I had been told this I usually have my backpack with me and never really purchase more than a few items. I just put the few items I have in my bag after purchase and head home. I do this to completely avoid using any paper bags altogether.

However, on this night I needed more than a few items and had over ten blocks to skateboard home. So I inevitably needed a bag to get my stuff home. After being rung up by the cashier she asked me if I need a bag quite politely. When I answered yes she proceeded to state “We charge ten cents cash per paper bag, is that okay?”

This piqued my interest because I was told about the exemption. I replied to her “it would be if that wasn’t against the new law”. Confused, she paused and asked her night manager to come over. He proceeded to explain to me that it’s what the owner of the store set as a rule. I told to him “the law says EBT purchases are exempt from the paper bag tax”.

He asked what I wanted to do.

Because I had no cash on me at the time, my solution was to load my backpack to the brim and carry the last few items home home by hand. Yes, I looked like that popular meme going around with the people holding all their groceries which says “Portland grocery shoppers be like”.

Prior to doing this though I had handed the night managers one of my business cards and asked him to have the owner call me. I have also since found the name and email address of the owner and emailed him.

I’ve gone in several mornings and directly asked for the owner and always get told: “he’s not here and we can’t just call him”.

Well, that’s where being a journalist and researcher comes in handy. After this, I decided to go digging and see what I could find out on the new paper bag tax.

HB 2509 was passed by Oregon’s legislator in 2019 and prohibits stores and restaurants from providing single-use checkout bags to customers. However, there is an exemptions section for HB 2509. Provided below is the exemption section of that bill. There are in fact a number of different exceptions where the paper bag tax is not applicable. 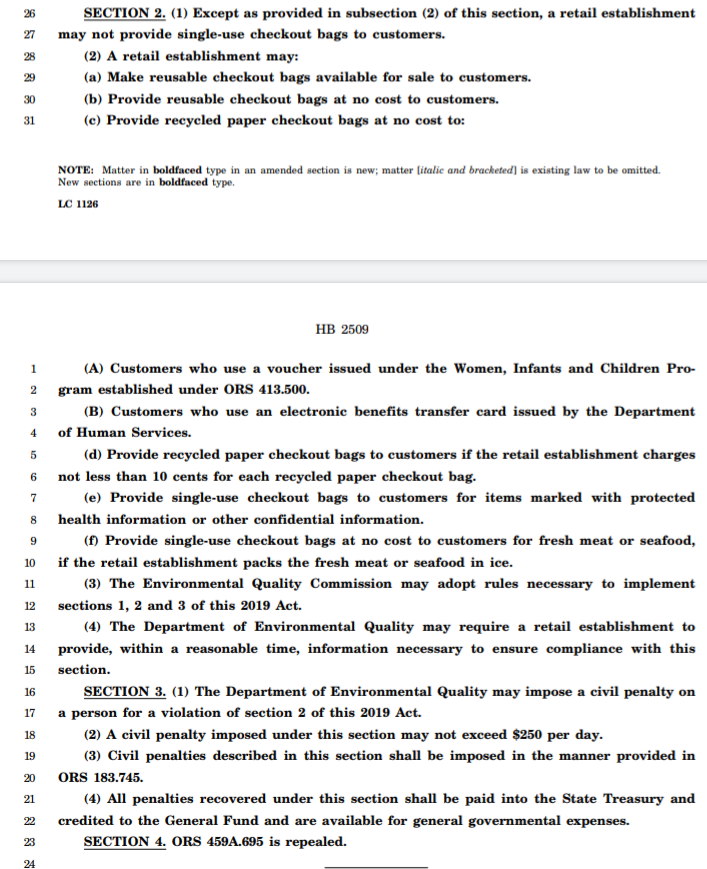 Out of interest I went to all the other major stores in the area and made similar purchases which I needed and asked for a bag. Every time I put it on my EBT card they never charged me for the bag. Neither WinCo, Fred Meyers, or Walmart charge EBT users for bags.

Village Portland reached out via email to the management of Grocery Outlet about the law, below is their response.

The management’s response, “moving forward if you feel this to be an issue you are free to request an empty box at time of check out” is insulting and the fact of how much paper is used in the box compared to the bag is also confusing because Portland is striving to use less paper products. They also seem to be misinterpreting the bill. Their attachments were the same as the exception section from above.

I responded: “Okay, obviously you are not legally understand the tax bill and its exceptions. I have had a lawyer look at this all and indeed they say that you are in violation of the law. So at this juncture I have to ask exactly what you are using the $0.10 cash for.”

In the hopes of having a full understanding of the exceptions for the bill and if this local grocery store was actually in compliance, Village Portland reached out to the Oregon Attorney General’s office via email but has yet to get a reply.

After talking to our attorney, it appears Grocery Outlet is correct in this matter. It also appears that the exception is by choice of the grocery store. If a store feels the extra bag charge is an undo burden on already low-income individuals they can forgo charging them. My takeaway from this is to not shop at Grocery Outlet— I’m not going to shop there anymore— because they don’t appreciate their customers.